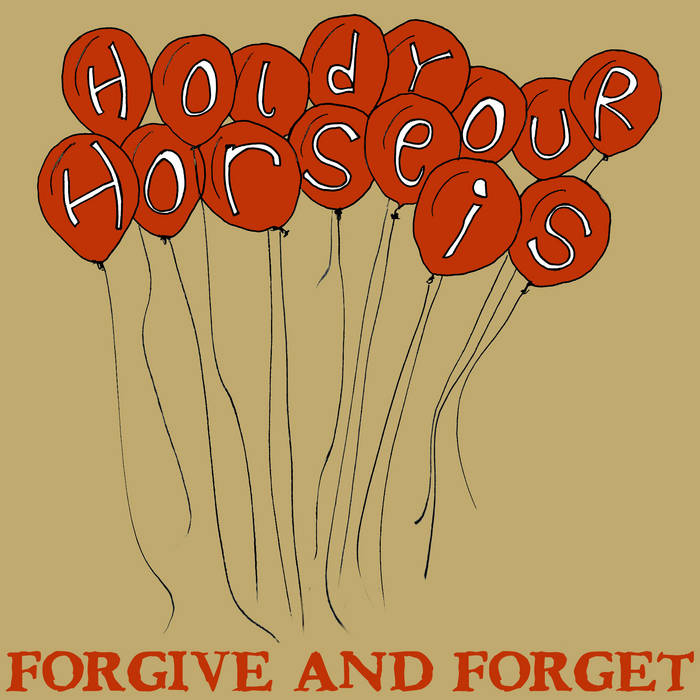 Buy here for however much you want or download for free from: www.hyhi.co.uk

ROOM THIRTEEN
We love these guys, they always produce the goods and they don't fail us now; this is yet another great melodic rock track from Hold Your Horse Is. "Forgive and Forget" is really catchy, causing you to hum it for eons afterwards, the guitars are solid, nice chunky riffs with snippets of quirkiness every now and again, the track really satisfies; starting with a dark edge, the tune is fast paced throughout and really flies in the chorus. 11/13

ARTROCKER
...the track itself is a bit more discordant and jagged than their previous releases, with a more metallic guitar sound punching through in the verses.. but it’s not a descent into thrashcore, as there’s a whole host of interesting sonic details and twists that keep your ears bouncing along for the full 3 minutes 8 seconds.

THE MONOGRAPH
There’s more weight behind these riffs than their number might suggest, and it’s a joyous moment when the the words ‘I heard what you said, forgive and forget’ tumble away to allow a thunderous chorus of Shellacked guitar noise break through.

DANCING ON A KNIFE
It’s the sound of a mechanised stampede. Tightly wound guitars methodically stab and dance over this angry track which runs white hot with sarcasm and frustration. Clocking in at just over three minutes, the tune is riddled with hooks making it the burly cousin of ‘You Show Up’, highlight from last year’s Rammin’ It Home EP.

FORWARD ROSSA
With dirty guitar layered over energetic pounding drums that grab your attention by the throat and demand you listen ‘Forgive and Forget’ shows you exactly what Hold Your Horse Is do so well, create exciting and energetic tracks that your ears will command be left on repeat until they’ve consumed every corner of your consciousness. 5/5

AMPED REVIEWS
The balance between the catchy choruses of early Reuben and a post-punk element to the vocals create an individual sound. When you factor in the instantly recognisable vocals and bass sound I can’t see any way this single can’t be a success.

KILLER PARTIES
Slightly lighter than most of ‘Rammin’ It Home’ but that’s no bad thing, they have managed to find the middle ground between straight out hardcore and catchy-as-anything poppunk astonishingly well, resulting in a track that is just as easy to dance to as it would be to headbang to.

TASTYFANZINE
I’ve got a bit of a soft spot for this set of loud, shouty buggers from Frimley and Fleet. There’s a lovely rich bass sound on this track and despite giving the impression that this song could spiral off out of control at any moment, their taut, mathy delivery maintains a balanced, if noisy, status quo. 7/10

KEEP/POP/LOUD
If you're one to shy away from big crunchy riffs because yr not a fan of the growly vocal style that so often accompanies post-hardcore then keep reading – for HYHI are the band for you. Said riffs are as bludgeoning as anything that, say, Pulled Apart By Horses have come out with, but are accompanied by a much more indie-friendly vocal.

SWEEPING THE NATION
...rushing but just this side of frantic while still carrying on like a runaway bulldozer, riffs poking through the cracks in the mortar. It's a nugget that drives straight for the cerebral cortex brandishing a pickaxe.

MUSIC FAN'S MIC
There is apparently an album due out this year. We say, bring it on, because if there are other songs as good as this on it, it’s going to be a fantastic record. Tremble before the might of their driving rhythms and frantic guitar riffs.

THE TEA ROOM
Another excellent track from the Frimley/ Fleet trio. Rammed full of energy, the drum beat provides a fabulous back bone for this fast paced song that is sure to become a favourite at shows. The bass and guitar are equally impressive, allowing Hold Your Horse Is to exploit their talent fully. The lyrics and vocals lend this track a distinctive sound and one thing is for sure: the band know how to write songs that will stick in your head for days and make you rock out at the same time. 4.5/5